10 Inspiring Paul Rand Quotes Which Are Actual in 2021

Paul Rand: Modernist Master. Probably every designer has heard of Paul Rand. He has been called the “father of graphic design and the 20th century logo,” the “man of the era,” the “modern Picasso.” He is one of the most popular designers of our time, whose work today not only inspires, but also surprises with its extraordinary and modern mood. Paul was born into a Jewish family. Since childhood, the boy had a talent for creativity. His father owned a grocery store, and the son decorated the windows with unusual patterns. Also, the future famous artist made posters for school holidays. Paul’s father was convinced that his son would not be able to make money from his hobby, and therefore Paul attended Manhattan’s Harren High School and studied at the Pratt Institute. Rand also graduated from Parsons School of Design. Despite his rich educational background and passion for the arts, Rand developed his graphic talent through self-education. Even though he had graduated from many art schools, he still considered himself self-taught. Paul later admitted that he was greatly influenced by work in Gebrauchsgraphik magazine and the German advertising style Sachplakat.

His first popularity as a designer came in the late 1930s, when Paul began creating magazine covers. Rand received no money for his first job, but in return he received full creative freedom and the first works in his portfolio. Paul drew illustrations for Directions and Apparel Arts magazines. At the age of 23, he took over the fashion pages of Esquire, working as the magazine’s art director. His work was praised by admirer, Laszlo Mohoy-Nagy. Later, at the age of 27, Paul was appointed chief art director of the William H. Weintraub advertising agency. In the 1950s, Paul Rand’s name became legendary and was associated with logo and corporate identity creation. IBM, NeXT, ABC, UPS, and many other companies are grateful to the designer, as he was the one who created their corporate identity and logos. 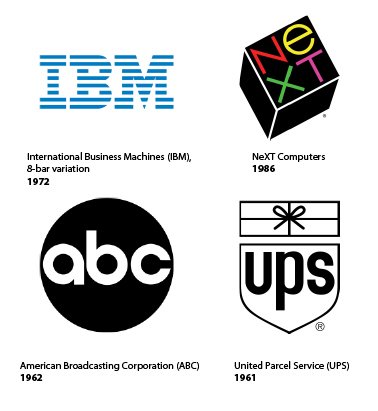 Rand’s signature work was his design for IBM, created in 1956, which, as Mark Favermann notes, was not just an identity, but a basic design philosophy that permeated both corporate and public consciousness.

Rand also created packaging and promotional materials for the company from the late 1950s to the late 1990s, including the well-known Eye-Bee-M poster. 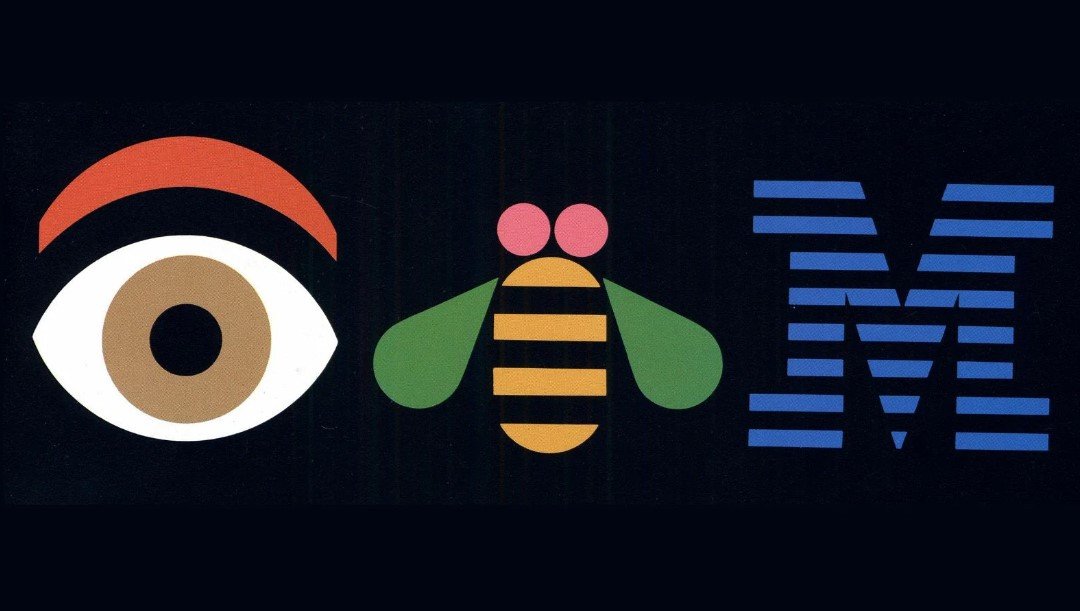 Rand created his most famous late logo for Steve Jobs’ company NeXT Computer. Steve Jobs was satisfied and called him “the greatest graphic designer ever.”

Paul devoted the last years of his life to designing and writing his memoirs.

10 Quotes by Paul Rand About the Art of Design 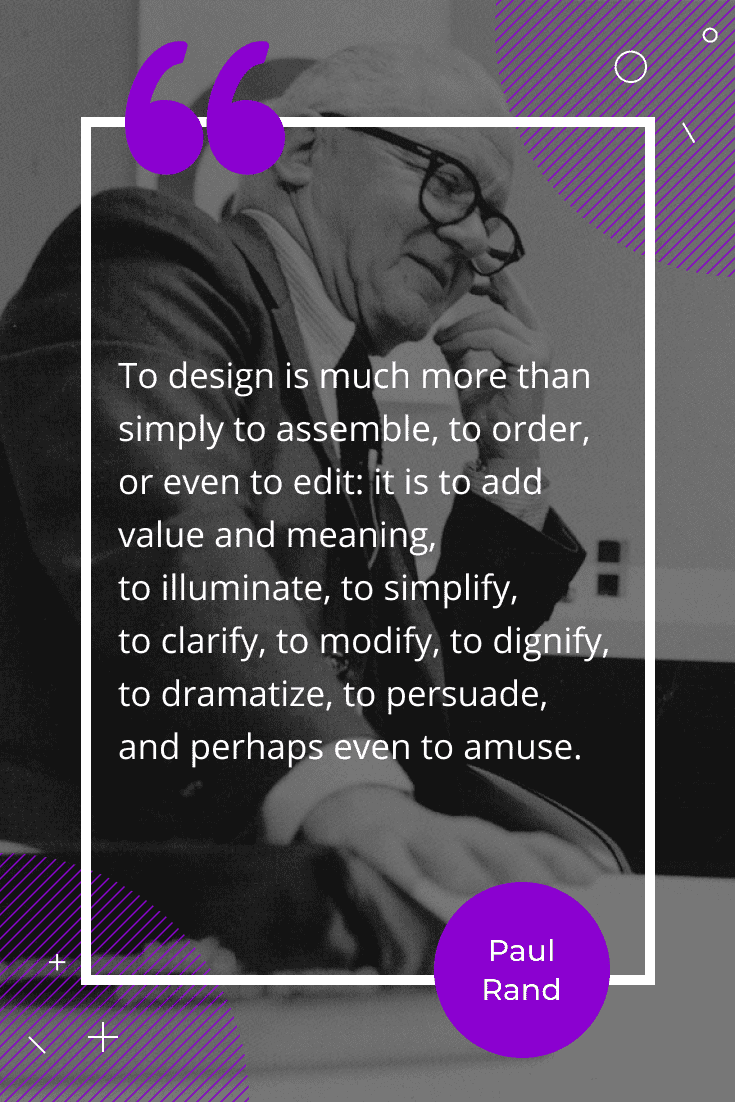 “To design is much more than simply to assemble, to order, or even to edit: it is to add value and meaning, to illuminate, to simplify, to clarify, to modify, to dignify, to dramatize, to persuade, and perhaps even to amuse.” 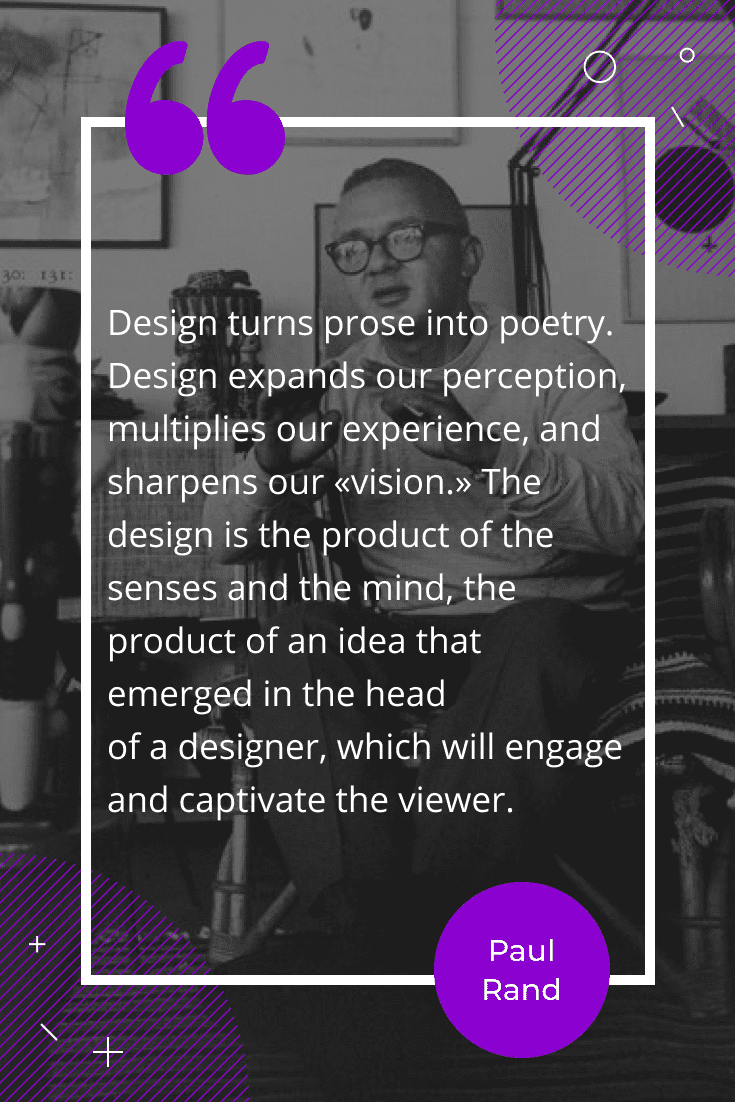 “Design turns prose into poetry. Design expands our perception, multiplies our experience, and sharpens our “vision.” The design is the product of the senses and the mind, the product of an idea that emerged in the head of a designer, which will engage and captivate the viewer.” 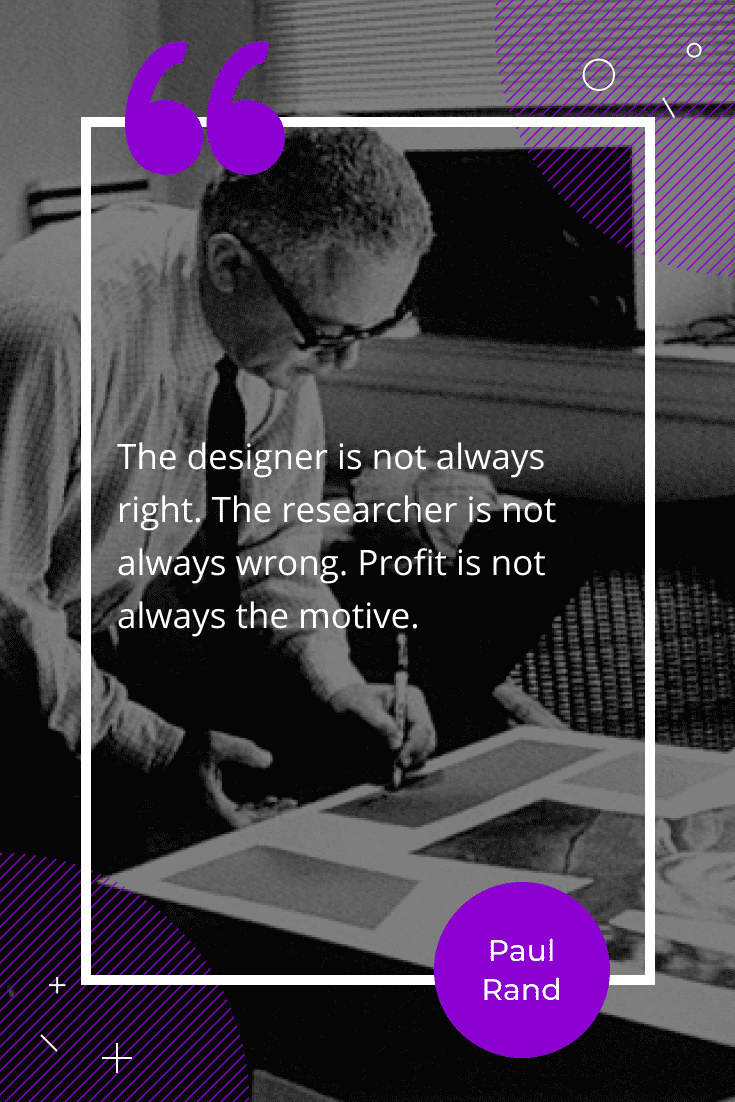 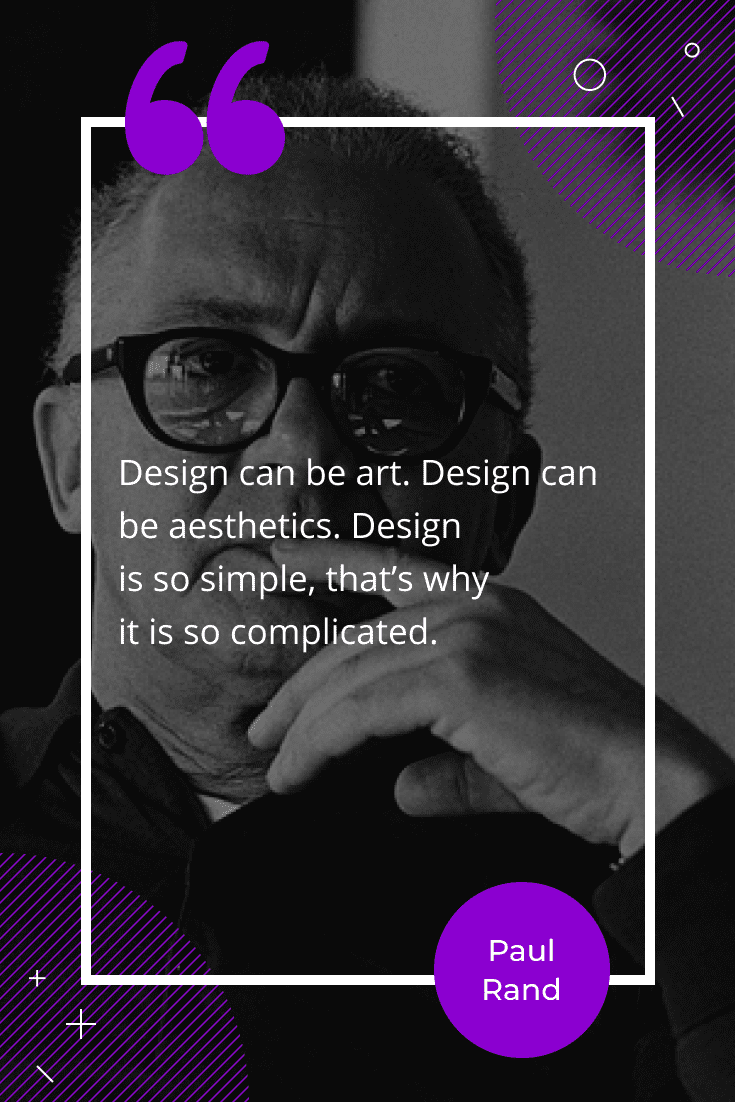 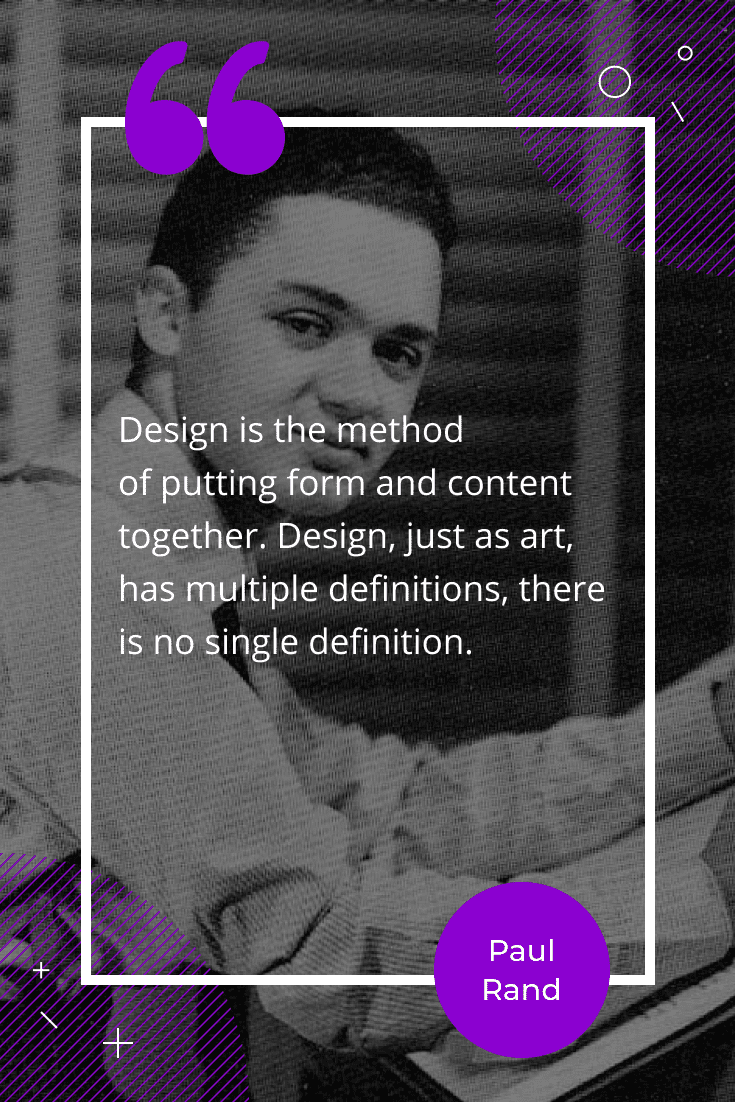 “Design is the method of putting form and content together. Design, just as art, has multiple definitions, there is no single definition.” 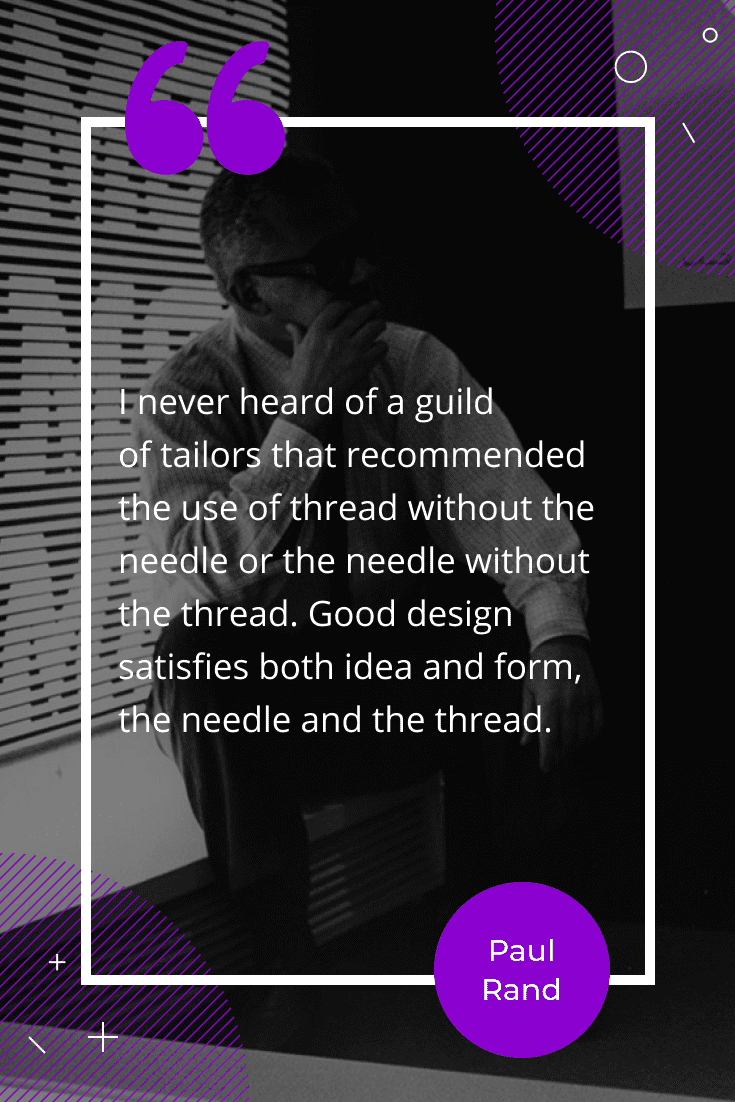 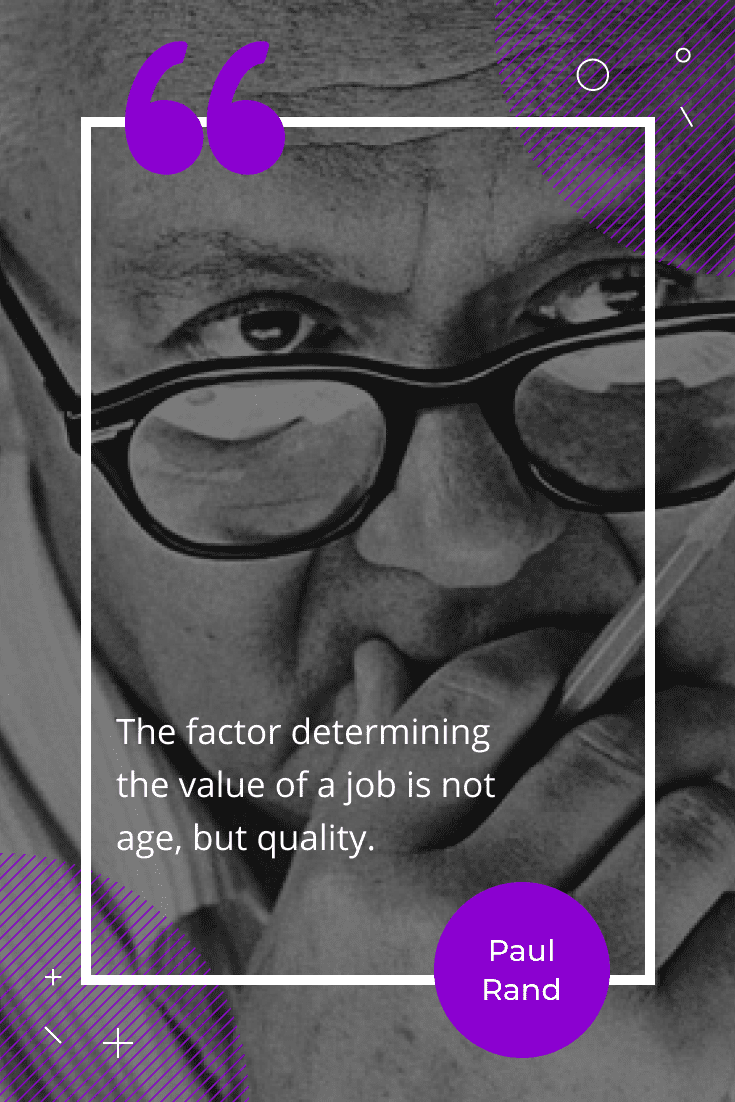 “The factor determining the value of a job is not age, but quality.” 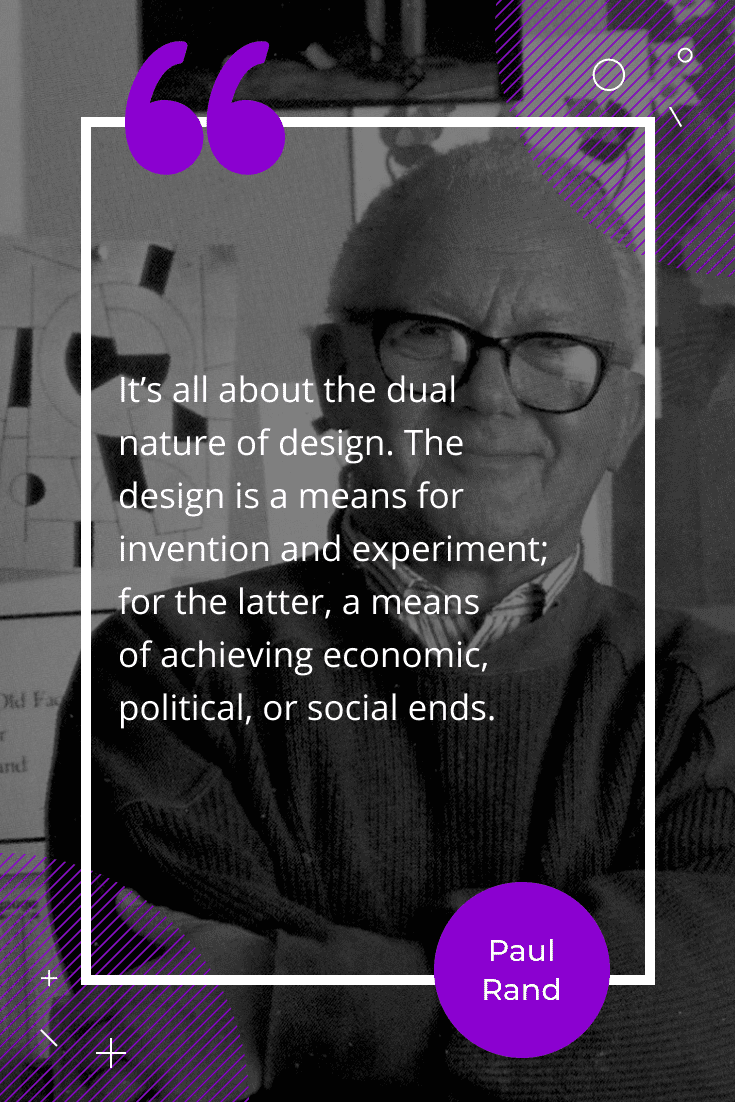 “It’s all about the dual nature of design. The design is a means for invention and experiment; for the latter, a means of achieving economic, political, or social ends.” 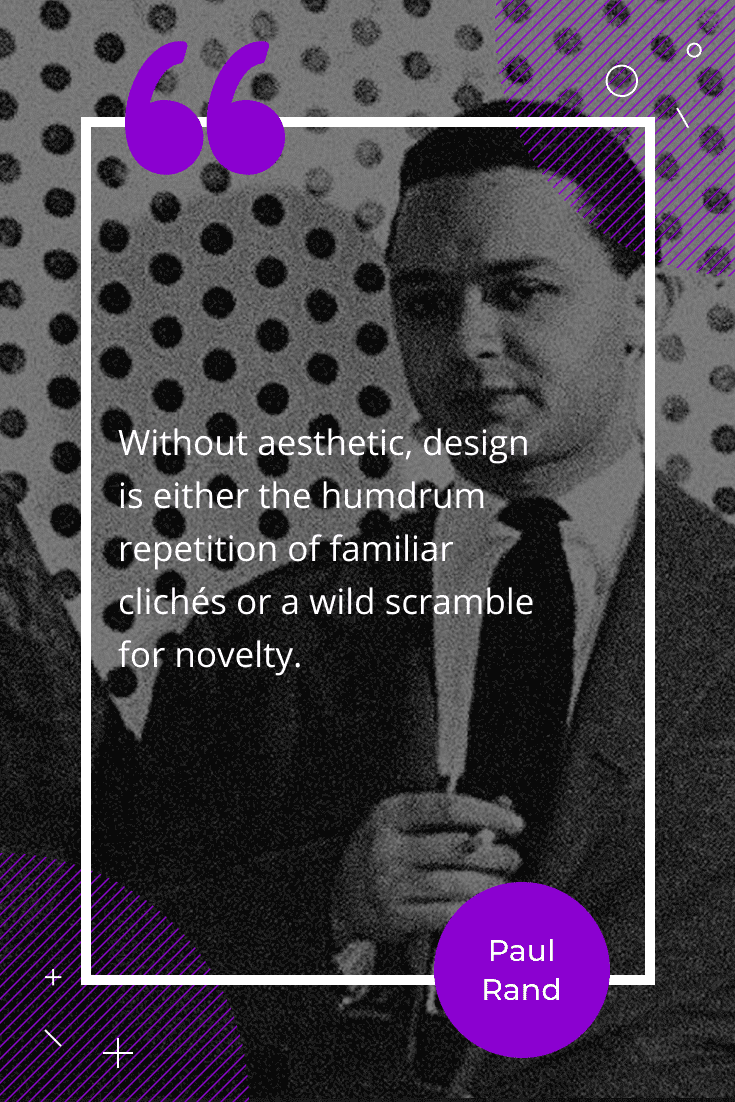 “Without aesthetic, design is either the humdrum repetition of familiar clichés or a wild scramble for novelty.”

“…more often than not, creative ideas are the product of chance, intuition, or accident, later justified to fit some prevailing popular theory, practical need, or formal obsession…” 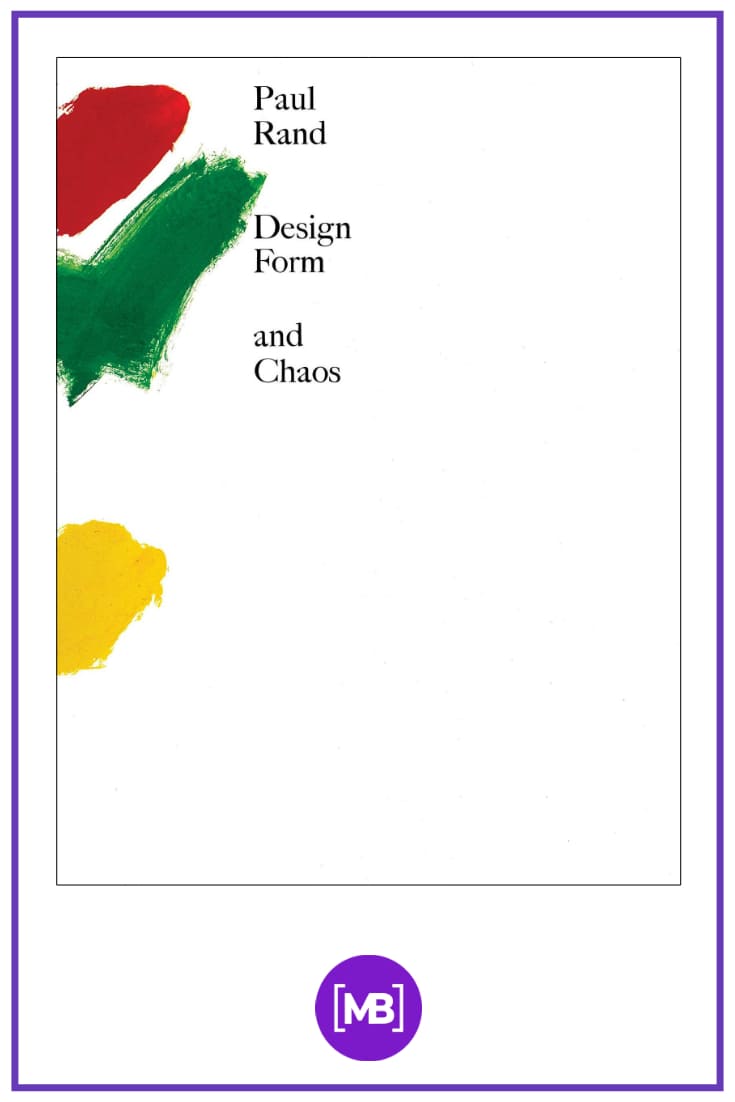 “Design, Form, and Chaos”. In this witty book, Paul Rand talks about modern design, denounces unprofessionalism, explores creativity, and the professional passion that gives birth to perfect work. Moreover, the author considers the vital topics for most designers. These are the importance of thinking in the design process, the relationship between designer and client, the role and place of market research, the use of computer technology, and work with typography. 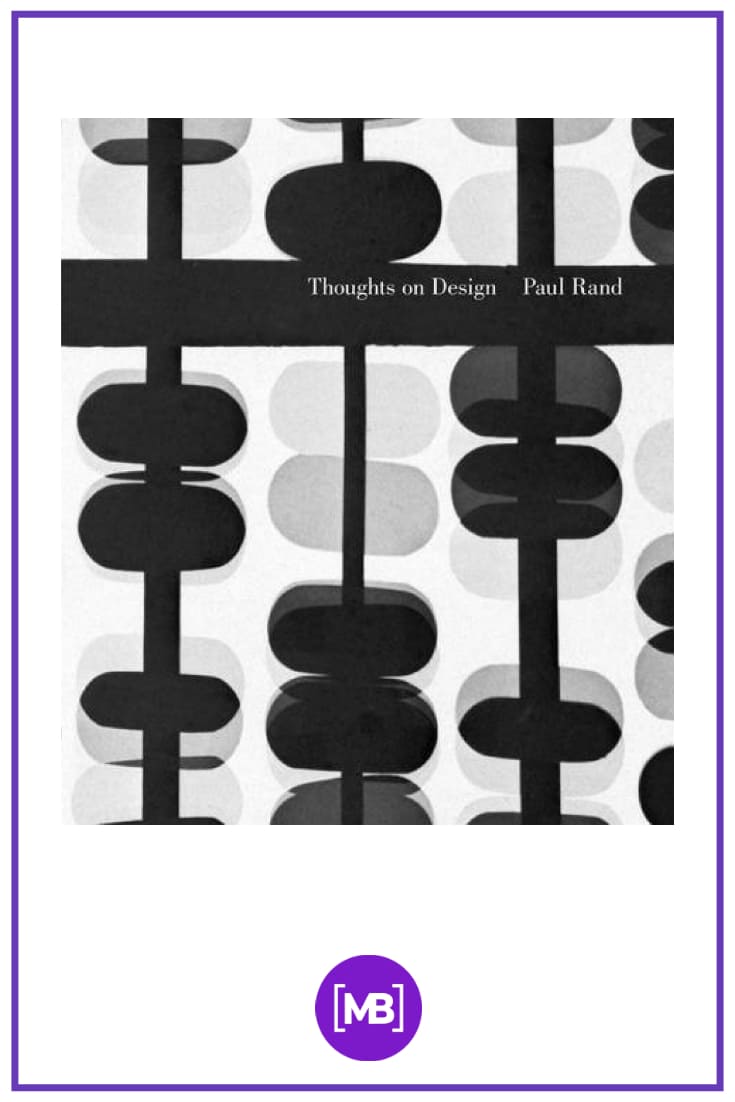 “Thoughts on Design”. This book first appeared in 1947, and the basic ideas presented in it by the author are still absolutely relevant today! Therefore, reprinted again in 2014, it immediately became an international bestseller. It is serious professional literature because the scientific approach is felt on every page. Additionally, the book is full of references to classical philosophical works. In general, Paul Rand talks about the fundamental points in design. The most popular idea in the book is that design, no matter how beautiful, juicy, or funny it is, is bad if it is out of place. After all, design should be a tool of communication and serve its purpose. 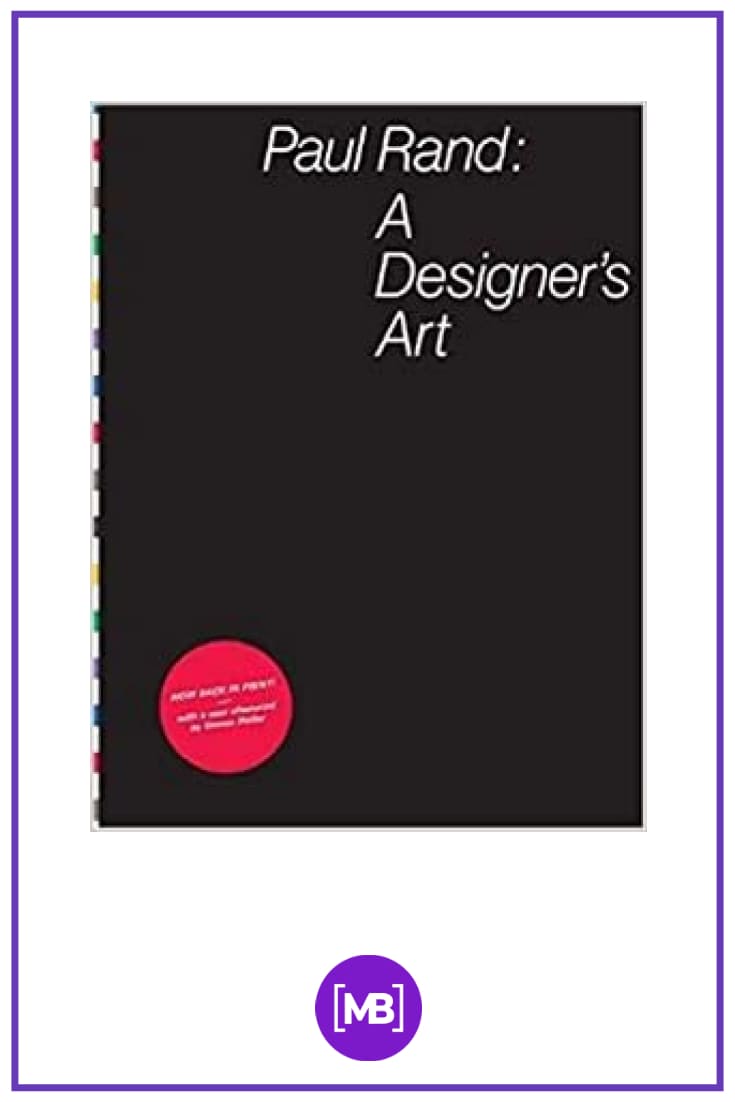 “A Designer’s Art”. This book is a collection of Paul Rand’s most influential writings. The author has always had a critical eye on design and the work of artists, not shy about expressing his views in the form of eloquent, precise, and incisive essays. This book includes more than two hundred graphic works and twenty-seven articles by Rand on visual communication, corporate style, commercial art, the designer’s tasks and cultural role, ideas, symbolism, typography, and much more.

Paul Rand proves through his texts and artworks that design is an eternity, especially when taken seriously. Rand was undoubtedly a forerunner, both in style and in vision of design. He turned the entire history of graphic design upside down. But no one should hope to reach his level by taking inspiration directly from his work, because you have to notice not what he does, but what he looks at.

10 Inspiring Paul Rand Quotes Which Are Actual in 2021. 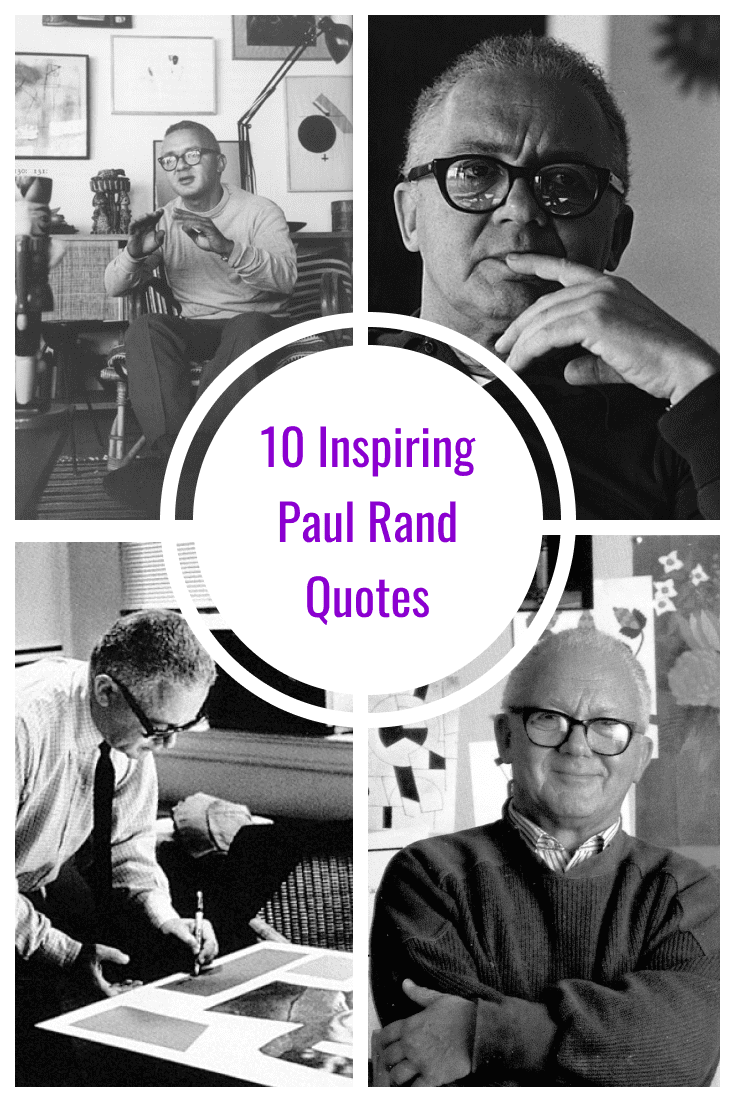 Liza Koenhoven
Content Creator
Liza is Masterbundles’ CMO and copywriter, passionate about black coffee, writing and Depeche Mode. She does her best to deliver you the most valuable deals on the web. Write to deals@masterbundles.com if you want to talk or publish your article.
Write a message +1(888) 598-03-31
Topic themes
📚 Learn Design
🎤 Events
📂 Tutorials
🔗 NFT
📱 Social Media
🎨 Graphics
🔨 Templates and Mockups
Subscribe to blog articles and best bundles
You have subscribed to articles!
×
Successful
× 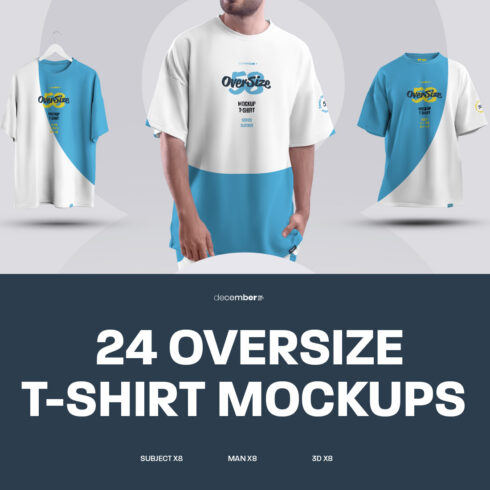 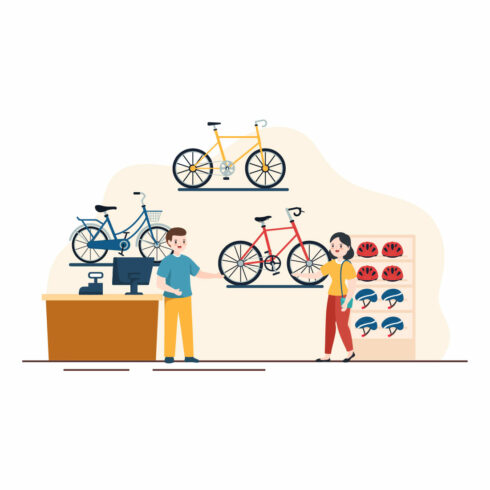 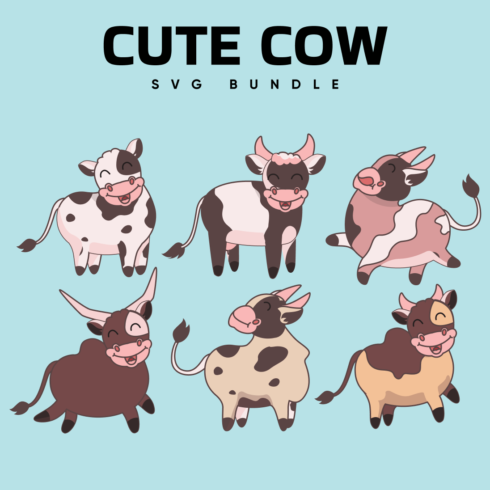 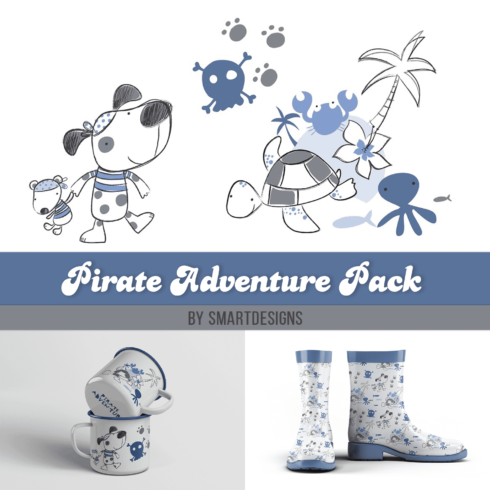 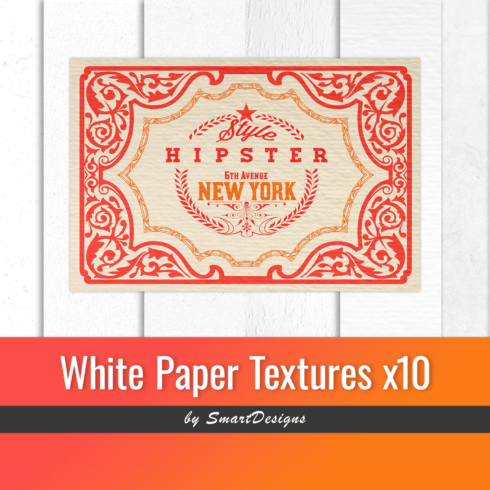 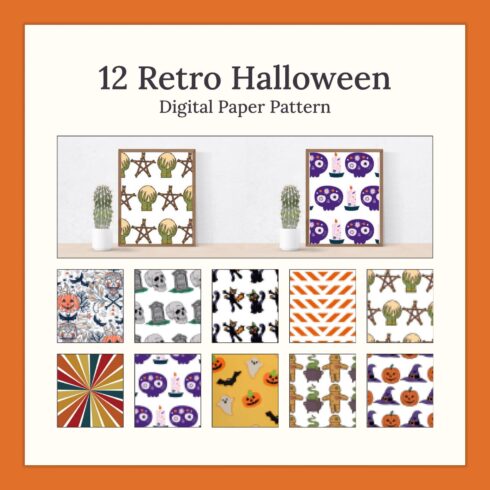 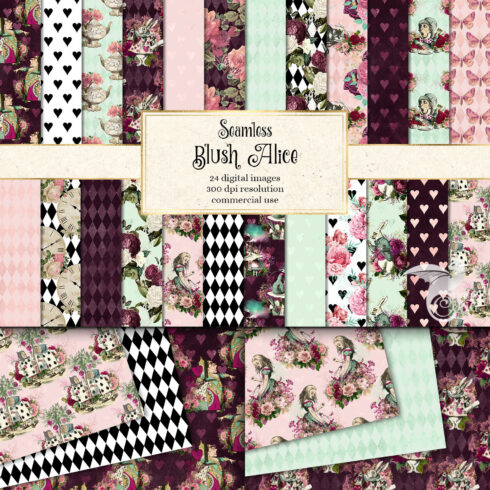 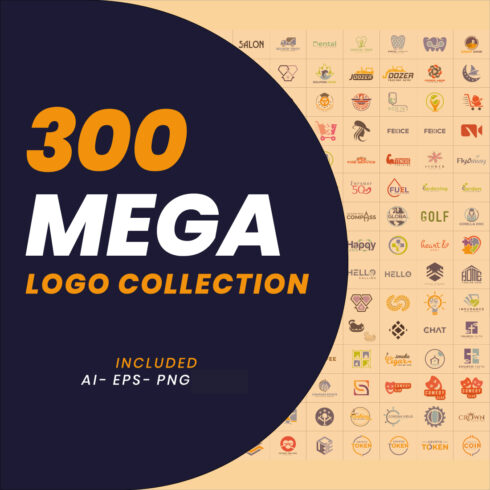 30+ Graphic Design Movies Every Designer Should Watch for Inspiration

Hottest Graphic Design News: What Happened in the Creative World in Summer 2022?